Passengers: 5-6 (depending on equipment)
Cruising speed: 220-235 km/h
Power: Turbine 680-810 HP turbine
Application: VIP, sightseeing flights, training, business flights, glacier landings, transportation
The Airbus Helicopters H125, former Ecureuil AS350 (franz. for squirrels), is a light multi-purpose helicopter with one engine. This helicopter Aérospatiale was prepared as the first type on the assembly line. The first prototype took off on June 27th, 1974. Also introduced with this type of so-called "Starflex" rotor head, a system in which the number of moving parts a quarter of the usual design was, what the maintenance intervals prolonged and greatly reduced the production cost. The "Ecureuil" is world's "workhorse" among the helicopters. It is used civil, military and in the US even in air rescue. 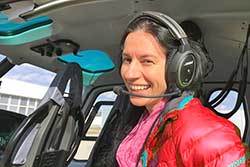 * Actual costs depend on your communication provider for calls to the austrian landline.